This is the title of a talk given at Lincoln’s Café Scientifique on 10 March by Dan Magnone of the University of Lincoln’s School of Geography.

A brief summary is below.

Today there are seven billion people on Earth. We produce enough food to feed ten million. The scourge of global hunger is due to inequality not inability.

Such food production as we have is a remarkable achievement and due, in part, to the development of modern agriculture and our mastery of soil.

Critical to this has been the use of fertiliser. Yet a key component this – phosphate – is a finite and increasingly expensive resource.

In Europe, the large amounts applied during the latter half of the 20th Century mean that we can now produce large yields with relatively low application rates – due to “residual” phosphate (that which is left in the soil after harvest).

However, during the 21st Century Sub-Saharan Africa is expected to have the most rapid population growth and will require a similar agricultural revolution.

For many African countries this means a doubling of the proportion of income (GDP) spent of fertiliser in the next decade before reaching a more sustainable food future.

Dan Magnone is a senior lecturer at the University of Lincoln, researching and teaching on the geochemistry of water and soil.

The story of Old Wood Organic is a covid lockdown story of extraordinary transformation. A bracken-filled clearing in a small area of woodland has made way for a productive, organic garden, and is already beginning to supply restaurants and individuals in Lincoln with just-picked organic salad and veg, delivered by bicycle. I think that counts… END_OF_DOCUMENT_TOKEN_TO_BE_REPLACED

Welcome to my vegan allotment

Ady, who has 12 years experience growing a productive, wildlife-friendly, fully vegan allotment in Lincoln, tells us about his experience, really useful vegan methods, and beginner tips: control weeds, save seeds, experiment and enjoy!

Lincolnshire’s foodbanks are struggling under Covid

Did you know there are over 40 foodbanks and community larders in Lincolnshire, including: Deepings, Gainsborough, Grantham, Horncastle, Lincoln, Louth, Skegness, Sleaford, Spalding and Stamford? People using the food banks had risen from nearly 1,600 in May 2019 to 7,216 in May 2020 (and this may still be an under-estimate) – an increase of 450%.… END_OF_DOCUMENT_TOKEN_TO_BE_REPLACED

This site uses Akismet to reduce spam. Learn how your comment data is processed.

Food news from our blog 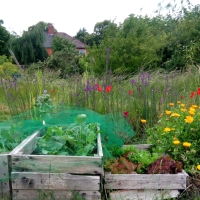